Highly accurate predictions of condensed-phase phenomena from first-principles are rare. Current theoretical methods either cannot consistently treat chemical reactions at a high level of accuracy, or are limited by system size or the time scale of the process. To overcome such obstacles, I will initiate a research program to devise better linear-scaling first-principles schemes to study interesting problems in biological systems and materials science, with an equal emphasis on theoretical advances and real-world applications. The ultimate goal is to offer the scientific community a reliable vehicle to qualitatively and quantitatively understand basic mechanisms in complex systems, and to gain insights into aspects of nature that cannot be easily probed by experimental means.

The success of ab initio quantum chemistry computational packages (e.g., GAUSSIAN, MOLCAS, HONDO, MELD, etc.) has made conventional ab initio theories essentially "household" names in everyday chemistry. Despite their popularity, these methods cannot be applied to many common chemical problems due to their prohibitive scaling properties, i.e., scaling worse than O(N4) for post-Hartree-Fock methods, where N is the "size" of the system. Among various efforts to surmount this scaling problem, working directly with low-order reduced density matrices has the most promise: accurate energetics with relatively low computational cost and without seriously sacrificing the quality of the wave function. This research area will be one of our primary interests.

With present computational resources, systems of thousands of atoms can be studied with the orbital-free Hohenberg-Kohn scheme; such a size is inconceivable for the present orbital-based ab initio and Kohn-Sham methods. In fact, the orbital-free Hohenberg-Kohn scheme is purely restricted by the physical size of the system under investigation, not by the number of electrons, and certainly has clear advantages over the orbital-based methods. Furthermore, with the help of linear-scaling summation techniques for long-range interactions, significantly larger systems can be modeled dynamically within the density-functional theory description using current computational power.

With the advances mentioned in the previous two sections, we then merge them into a coherent embedding formalism and methodology to study chemical and physical processes in complex systems, especially biological systems and condensed-phase materials. The basic idea behind such an embedding scheme is to treat the large surrounding environment by a less computationally intensive method (e.g., density-functional theory), and to apply high-level post-Hartree-Fock methods to the chemical reaction regions such that accurate energetics are obtained. Ultimately, we will be able to develop highly accurate linear-scaling first-principles methods and apply them to reliably predict the behavior of complex systems.

During the course of research, graduate students and postdoctoral fellows will be equipped with a broad set of skills and knowledge (physics, chemistry, mathematics, computation, biophysics, and materials science), benefiting their future careeers. 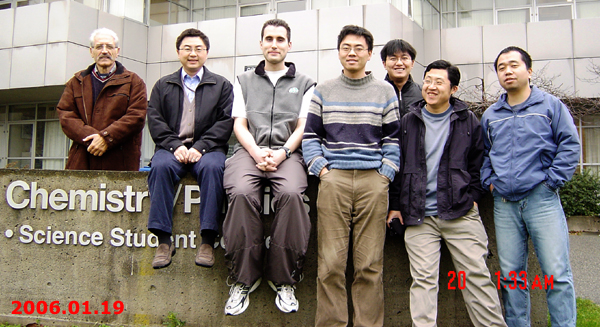