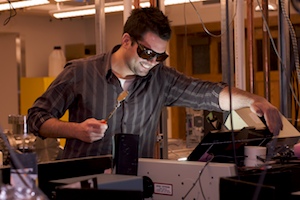 Plasmas range from familiar (as in fluorescent light bulbs and flat-screen TVs) to the exotic in the extreme (thermonuclear fusion reactors and the cores of white dwarf stars.) These gases of free positive ions and electrons can exist over an enormous range of density and temperature.

Under normal plasma conditions, the free electrons can move rapidly to screen the ions from the influence of electric fields of nearby ions or external fields. As density increases, or temperature decreases, the ions can begin to notice each other, leading to liquid-like correlations in position and velocity.

An ultracold plasma offers a laboratory-scale setting in which we can develop an understanding of exotic, strongly-coupled systems. The approach to form ultracold plasmas has developed from ultracold atom technology. A number of groups have trapped atoms in a magneto-optical trap, laser cooled them to microKelvin temperatures, then photoionized them into a plasma. Observable properties such as expansion velocity offer a window into the internal dynamics of the electrons and ions, and the results have provided insight into how the thermal properties of the light electrons drive the expansion of the much heavier ions.

The mechanism of trapping and laser cooling limits current atom experiments to only a handful of atoms. Many important plasmas contain molecules, and their distinct properties such as vibration and rotation, and their ability to dissociate will affect plasma behaviour. But molecules can not be laser cooled.

Molecules can be cooled in a molecular supersonic expansion, and we have applied this technology to create molecular ultracold plasmas for the first time. We cool and form plasmas from nitric oxide (NO) molecules, but this approach will cool any molecule that can be vapourized. The supersonic expansion produces a molecular beam containing molecules cooled to about 700 mK, but moving at 1300 m/s through the vacuum chamber. This is fast, but it simply means that we create the plasma in one location and detect it a few centimetres downstream, rather than fixed in one place as in a MOT.

While the molecular beam temperature of 700 mK is much higher than a laser-cooled atom at 70 μK, this appears cold enough for a plasma to form. Temperature measurements on trapped atom plasmas have shown that the initial processes involved in creating the plasma heat the atoms and erase the memory of the precursor temperature.