Actin (View 3hbt) is involved in several aspects of maintaining the circulation of blood, from its contractile function in cardiac and vascular muscles to its role in the motility of white blood cells. Gelsolin is found in circulating cells such as platelets and macrophages. It is a regulator of actin filament assembly and disassembly. Its actin-binding ability is sensitive to and may be regulated by variations in levels of calcium ions or phosphatidyl inositol metabolites. Gelsolin in plasma prevents viscosity-related problems that would occur should cellular stores of actin be released into the circulation as a result of cell death due to injury or disease. The vitamin D binding and carrier protein (DBP) in plasma also aids in clearance of actin from the circulation.

We have grown crystals of intact plasma gelsolin and have solved its three dimensional structure in a calcium-free state using x-ray diffraction methods (View 1d0n). The protein consists of six independently folded but structurally similar domains that interact with each other to give a relatively compact, globular appearance. We also have determined the structures of several large fragments of calcium-activated gelsolin, including those of both the N- and the C-terminal halves of gelsolin, respectively (View 1rgi, View 1h1v), each bound to an actin monomer. These structures allow us to model how interaction with calcium ions might activate gelsolin to carry out its actin capping, severing and nucleating functions. We are working to solve the structure of fully activated, whole gelsolin bound to actin. Throughout this work, I have enjoyed a long and productive collaboration with Dr. Robert Robinson, now at the Institute of Molecular and Cell Biology, Singapore. 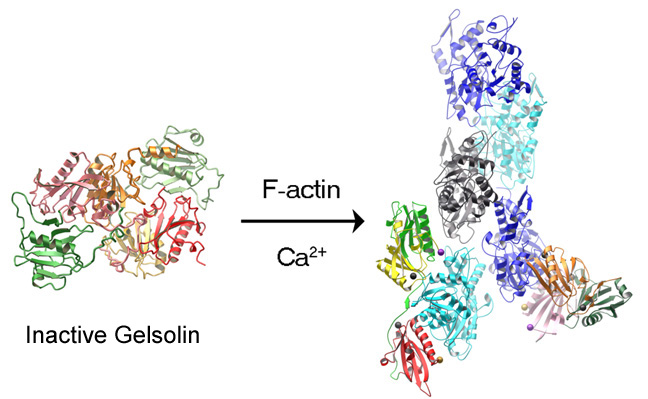